The Town of Wells is located within Zone 1 for the Wildfire Danger Report issued daily by the Maine Forest Service.

Fuels do not ignite readily from small firebrands, although a more intense heat source, such as lightning, may start many fires in duff or punky wood. Fires in open cured grassland may burn freely a few hours after rain, but woods fires spread slowly by creeping or smoldering, and burn in irregular fingers. There is little danger of spotting. The color code for Low is green.

Fires can start from most accidental causes, but with the exception of lightning fires in some areas, the number of starts is generally low. Fires in open-cured grassland will burn briskly and spread rapidly on windy days. Woods fires spread slowly to moderately fast. The average fire is of moderate intensity, although heavy concentrations of fuel, especially draped fuel, may burn hot. Short-distance spotting may occur, but is not persistent. Fires are not likely to become serious, and control is relatively easy. The color code for Moderate is blue.

All fine dead fuels ignite readily and fires start easily from most causes. Unattended brush and campfires are likely to escape. Fires spread rapidly and short-distance spotting is common. High-intensity burning may develop on slopes, in concentrations of fine fuel. Fires may become serious and their control difficult, unless they are hit hard and fast while small. The color code for High is yellow.

Fires start easily from all causes, and immediately after ignition, spread rapidly and increase quickly in intensity. Spot fires are a constant danger. Fires burning in light fuels may quickly develop high-intensity characteristics; such as, long-distance spotting and fire whirlwinds, when they burn into heavier fuels. Direct attack at the head of such fires is rarely possible after they have been burning more than a few minutes. The color code for Very High is orange.

Fires under extreme conditions start quickly, spread furiously, and burn intensely. All fires are potentially serious. Development into high-intensity burning will usually be faster and occur from smaller fires than in the very high danger class (item 4). Direct attack is rarely possible, and may be dangerous, except immediately after ignition. Fires that develop headway in heavy slash or in conifer stands may be unmanageable while the extreme burning condition lasts. Under these conditions, the only effective and safe control action is on the flanks until the weather changes or the fuel supply lessens. The color code for Extreme is red. 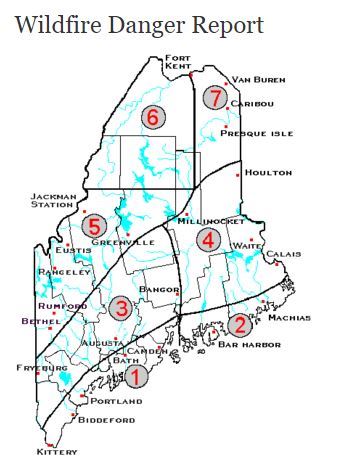